Boruto: Naruto Next Generations has just Nerfd Naruto in a major way, by killing off Kurama. The Nine-Tails sacrificed itself in the battle with Isshiki Otsutsuki, by unlocking the fatal Bayron Mode in Naruto.That power allowed Naruto to go toe-to-toe with Isshiki, at the cost of burning up internal chakra. Kurama made sure it was his chakra that was ultimately consumed, leaving Naruto without his greatest source of power. However, just as quickly as Boruto has stripped Naruto of his Jinchūriki status, it may soon give it back to him in the form of a new tailed beast for him to bond with!

The Isshiki Arc of Boruto revealed some game-changing expanses to the larger Naruto mythology. We learned that the Otstusuki are actually alien parasites who are able to “download” themselves into powerful new hosts bodies after death, using the Karma mark. The purpose of the Otsutsuki’s existence was to go from planet to planet, harvesting the chakra of all living things, in order to grow a Divine Tree and harvest the chakra fruit that provides power, chakra, youth, and longevity.

Of course, there are several catches to the Otsutsuki method of immortality. The detail that’s now so relevant to Naruto is the fact that the Otsutsuki Divine Tree can only be grown from the seed of a Ten-Tails beast.

Isshiki and his Kara Organization have kept a Ten-Tails locked away in another dimension while they battle Naruto, Boruto, and the Hidden Leaf shinobi. Sasuke infiltrated the facility but has lost the ability to return since his Rinnegan was crippled. 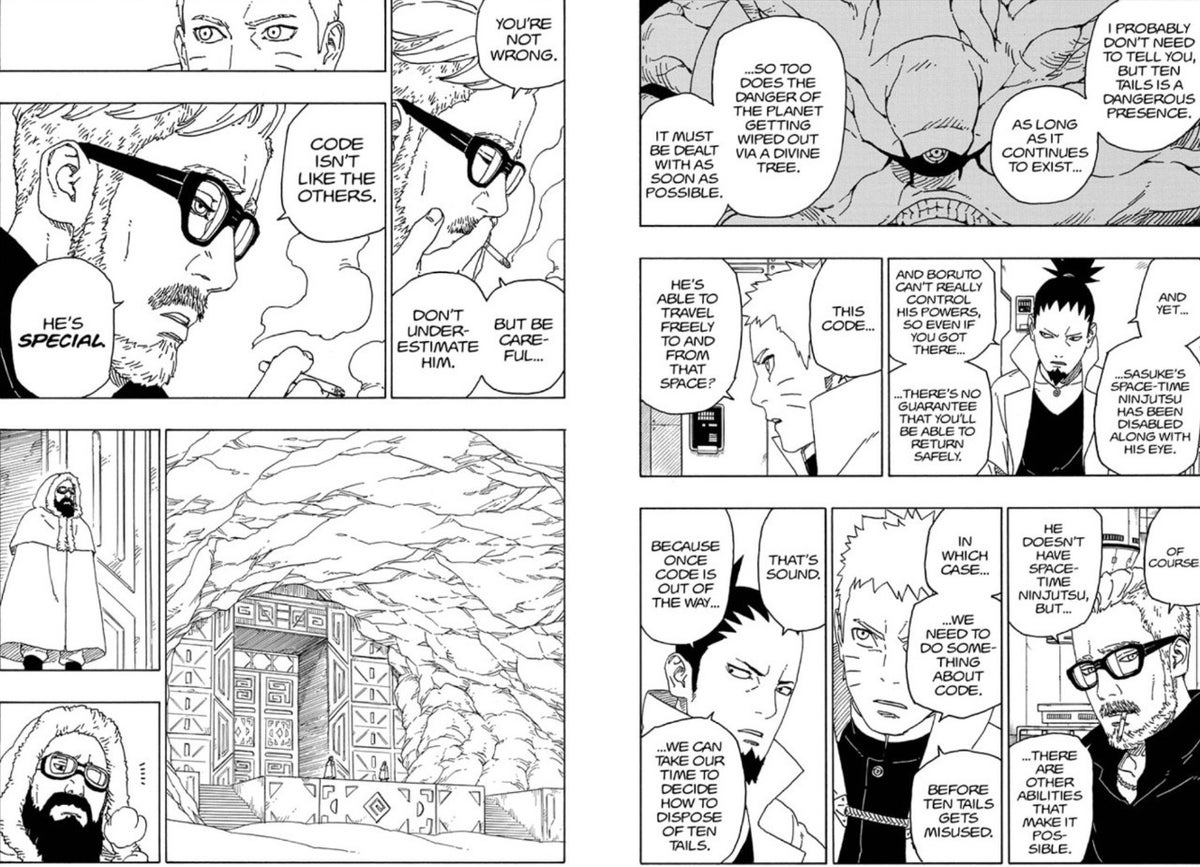 In Boruto Chapter 56, Naruto and Shikamaru and Kara’s defected scientist Amado strategize what to do about Isshiki’s Ten-Tails, since it poses a threat to Earth so long as it exists. The dilemma is clear: it’s a one-way trip to the Ten-Tails dimension for Naruto - and there’s still Isshiki’s most powerful henchman Code to deal with, as well.

However, this “problem” for Naruto and Co. also presents a clear opportunity: Naruto may reach the Ten-Tails, but instead of destroying it, he can bond with it. The Sage of the Six Paths once acted as Jinchūriki of the Ten-Tails - what other legendary warrior would we expect to follow in that path, other than Naruto?

The fun part is that Naruto bonding with Ten-Tails isn’t a happy and glorious power-up: the beast could give Naruto more power than he’s ever had - but unlike Nine-Tails, Naruto wouldn’t necessarily be as noble and in control of his beast, as he once was.