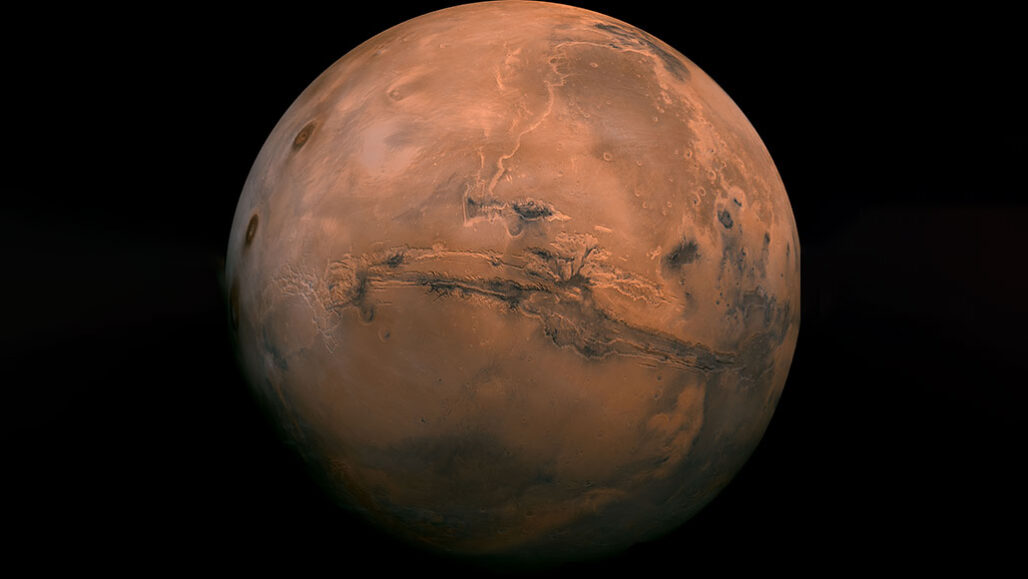 This picture of Mars was put together from a series of photos taken by the Viking orbiter. The huge trench running across the surface is more than 3,000 kilometers (2,000 miles) long. That’s as long as the United States is wide.

Mars and Earth have a lot in common. They’re both rocky planets. Though Mars is smaller, both planets have a similar length of day. They both have ice, and Mars might even have liquid water like Earth. Mars may have earthquakes — er, well, Marsquakes. And scientists have been gathering evidence that Mars, too, may hold life, in the form of microbes.

The Red Planet, like Earth, is in the Goldilocks zone around the sun. That’s a zone where water can exist as a liquid — which means temperatures are right for life to potentially exist. But that doesn’t mean Mars would be a fun place for humans. Mars’ thin atmosphere doesn’t have the oxygen we need to breathe. Temperatures get very, very cold. And wind storms can be devastating.

Still, Mars is a prime target for future astronauts, even if getting to Mars and back is no easy task. Mars is relatively close to Earth, at least for an object in space. At its closest, Mars is only 62.07 million kilometers (38.6 million miles) away. That’s far enough that any messages will take 20 minutes to travel back home. And a space trip would take six to nine months to get there, and another six to nine to return home.

That trip would be full of danger. Radiation in space can damage astronauts’ brains. Spending time with so little gravity can leave muscles and bones very weak. And then there’s the social issues. As one scientist says: ““The mission to Mars is likely going to be four to six individuals [living] together in a can the size of a Winnebago for three years.” With so much time together and so few people, astronauts heading to Mars will need to be very careful to keep their cool.

Scientists are working hard to keep astronauts safe on the trip to the Red Planet. They’re finding ways to mimic gravity and figuring out what to feed people to keep them healthy. They’re even developing tools to help astronauts diagnose and treat their own diseases.